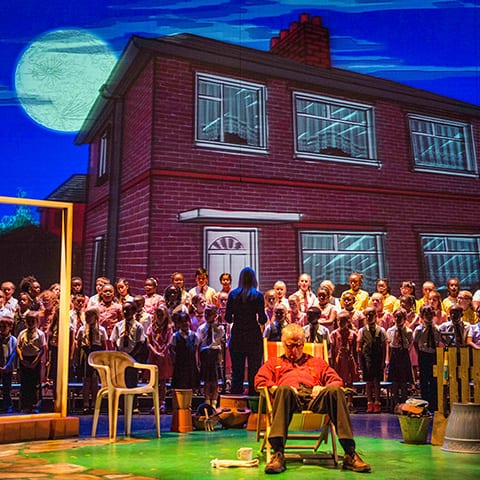 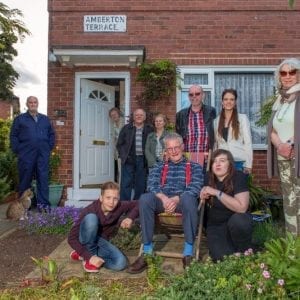 Gipton the Musical was a collaborative show celebrating life on the estate both past and present, co-produced by local people. It was performed on the 18 July 2015 at West Yorkshire playhouse to a sell-out crowd.

The show was a culmination of 18 months of devising, researching and rehearsing by the residents of the Leeds Gipton Estate with artists Boff Whalley and Jane Morland with over 200 local residents involved.
.
The project supported Gipton residents with delving into the history of their area and seeking out real life stories about locals and neighbours that were then used within the creative process in an accessible and engaging way. Local people were offered opportunities to sing, dance, make costumes, build sets, design the lighting and even write the script in parity of status with professionals and volunteers, encouraging community participation and individual research.
.

'The residents of Gipton are extremely proud of their area and there is a strong sense of community. Gipton: the Musical gives residents the chance to tell their stories and challenge negative stereotypes. At the same time, the residents have been working together for months now in developing the musical – doing everything from storyline research, set building, writing songs and of course acting – and as a result there is a greater sense of connectedness amongst the residents.'

As well as strengthening community cohesion and resilience, the project encouraged the residents to relive and celebrate some of the great stories and characters from the area.  Set in the summer of 2015 the musical tells the story of a local man, Graham Tempest, and his memories of bonfires in the roads, football in the streets, the Picture Palace and nights at the local dance halls. The use of a local protagonist celebrates the history and present of Gipton through a direct perspective and ensures authenticity within the narrative . It also projects and celebrates under-represented voices.

Here's what some of the cast have been saying:

“I think it’s absolutely fantastic that twelve months ago all this was just an idea. I’m absolutely thrilled with it, and I can’t get into discussion about the show without getting emotional – growing up in Gipton, this is a tribute to my mum and dad.” Graham

“Everyone seems to know about it, it’s great. It’s lovely that a play can be done about a well-known estate and I love how it’s bringing people from the community together. “ Jessica

“I’ve loved working with all these people involved in the musical. I’ve loved every minute of it – especially the rehearsals. And it’s been a great deal of fun!” Steve

“I think it’s great that a very mixed group of people of all different backgrounds and ages have gelled so well together. There’s no bossing around - it’s all just come out of the story. And it’s great that an oldie like me can get on the stage.” Jennifer

“I’ve enjoyed playing in it. It’s been an experience I’ll never forget – being on stage at the Playhouse in front of all them people, I think it’s the most fantastic thing.” Peter

This celebration of the building of new skills and confidence coincides with Boff Whalley’s comments that:

"All too often this sort of work is about the end product, the play itself. But Gipton the Musical has been very much about the process, with people learning new skills and gaining the confidence to sing, act and perform.  For some of them it’s been absolutely life-changing.”

This supports Space 2’s vision of inclusive community participation within the arts being a transformative tool for individual health, well-being and improved confidence.

A full recording of the play can be found at https://www.youtube.com/watch?v=nVeEVTxEvvI