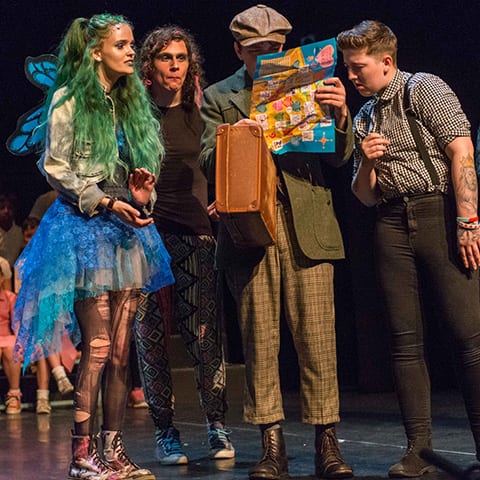 'I do like to be beside the Seacroft' was an all-singing, all-dancing, all-laughing show set in the ginnels and parks of Seacroft and was performed at West Yorkshire Playhouse on the 15th July 2017, co-produced and performed by local people - there's no sea in Seacroft!

Following on from the 2015 sell-out performance ‘Gipton the Musical’ Boff Whalley, musical director and former member of Chumbawamba, alongside actor and director Jane Morland wrote and co-directed ‘Oh I do like to be beside the Seacroft’.

Stories and histories collected from the Seacroft community were incorporated within a mythological plot that included a live band, dancers, mermaids and sea creatures, bringing East Leeds to life. The show tells the story of a smalltown boy on an epic journey that lands him not by the sea, but by the Seacroft. It draws on the area’s history and its tales and is made from local myths and local geography, with some truth interwoven alongside fairy-tale!

““We are inviting local people to come along, tell us their stories of Seacroft - what has happened in the past, as well as what they would like to happen in the future.”

“We are also working with the LS14 Trust and drawing on its amazing collection of local stories.”

“The map, and any stories gathered, will then contribute to a collection of ideas for a new performance, written especially for the community of Seacroft, by the community.”

Alongside their contributions to the narrative, residents were offered opportunities to sing, dance, make costumes, build sets, design the lighting and even help write the script. Space2 ran workshops to help residents train as performers, designers, writers and technicians. Through local residents being involved within the creative process, this accessible and exciting spectre exemplified Space2’s participatory arts approach and collaborative principles, creating community cohesion and resilience and building the skills, confidence, aspirations and self-esteem of local people.

The project was funded by the People’s Health Trust, The Health Lottery, Leeds City Council and organised in association with the LS14 Trust.

LS14 Trust is a not-for-profit community organisation set up by residents in Seacroft, to help people get the best out of life in the area. For further information visit http://www.ls14trust.org/

A full recording of the play can be found at https://www.youtube.com/watch?v=FDYNHRvfTDs

We use cookies to ensure that we give you the best experience on our website. If you continue to use this site we will assume that you are happy with it.OkPrivacy policy