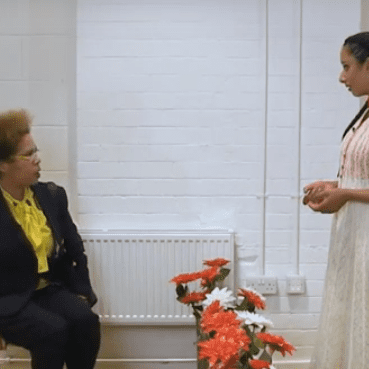 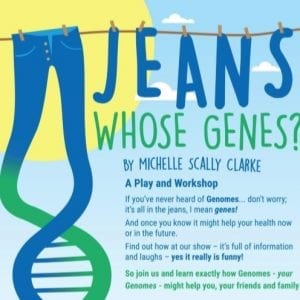 ‘Jeans, whose Genes?’ was a cross culturally sensitive play performed around the North of England in Summer 2018, developed by the Yorkshire and Humber NHS Genomic Medicine Centre in collaboration with Space 2.

The play aimed to raise awareness of genomics and genetic diseases, incorporating these issues within a humorous, colloquial chat between two Caribbean and South Asian neighbours and close friends, communicating along their adjoining gardens. This concept came directly from participants, exemplifying Space2’s principles of co-production in the creative process and ensuring authenticity within the narrative. The play explores some of the concerns and apprehensions regarding modern medicine and genetic testing among Black and Minority Ethnic communities. The play, starring renowned writer and poet Michelle Scally Clarke, seamlessly mixes humour and anecdotes to portray a powerful message. Some storylines were also extracted and researched directly from focus group responses, breaking down cultural barriers through this medium and ensuring accuracy and authenticity in the concerns raised. This also exemplifies Space2’s collaborative principles, involving the local community within the artistic process.

The modern mobile phone – and all its endless possibilities – is used as an analogy to demonstrate the life-altering potential and possibilities in genetic advances and scientific developments to improve healthcare. This further displays the use of art as a vehicle to discuss current issues in a form that is impactful and culturally sensitive. Alongside the play, the workshop invites debate around new scientific advances, genomics, personal information and its implication on both the individual and families, particularly for genetic risks.

The play was developed in collaboration with Space2, the Yorkshire and Humber Genomic Medicine Centre, and focus groups from the Black Health Initiative and Shantona Women’s Centre in Leeds.

NHS England is currently in the process of developing a national Genomics Medicine Service. To learn more about how Genomes could help you your friends and family now and in the future visit www.genomicsengland.co.uk